Why Holy Objects are Precious and Wish-fulfilling 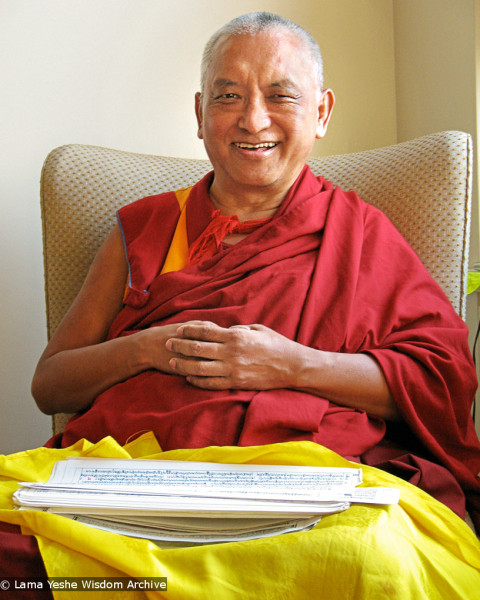 Every time you look at holy objects—pictures of the Buddha, statues, scriptures, stupas—they plant the seed of liberation and enlightenment in your mental continuum. How? When you look at them they plant a seed or positive imprint on your mental continuum so that later when you meet Buddhadharma, either in this life or in future lives, you are able to understand the words and the meaning of the teachings. From that, you are able to practice the meaning of the Dharma you have understood, which causes you to cease the gross and subtle defilements by actualizing the path and then your mental continuum becomes omniscient mind.

Every time we see holy objects it purifies so much negative karma, so many defilements. This is because of the power of the holy object. Holy objects have so much power. It’s like an atomic bomb—even though it is small it can bring so much harm and cause so much destruction. That example is negative but what I am saying is that the material has power, like electricity. The material of an atomic bomb has the power to harm and destroy the world. The material of holy objects—statues, scriptures and stupas—has the power to affect our mind, to leave a positive imprint.

There are five paths to achieve enlightenment and the first is the Mahayana path of merit. Within that are three levels: small, middle and great. As soon as your mind achieves the great level of the path of merit then wherever you are, whether you are in a holy place or in the toilet, anywhere, you see numberless Buddhas around you. Numberless Buddhas are always there but we just don’t see them because our minds are so obscured. When you reach that level you will actually see uncountable Buddhas in nirmanakaya aspect wherever you are. Then, when you reach the right seeing path, you become an arya being and you can see numberless Buddhas in sambhogakaya aspect. This explains the quotation that “Even if you look at a drawing of Buddha done on a stone wall out of anger it causes to see ten million Buddhas.”

So the benefit we get each time we see a statue of Buddha, a picture of Buddha or a stupa is like the limitless sky. It causes us to achieve all the realizations from Guru devotion up to enlightenment and to achieve all the numberless qualities of the Buddha’s holy body, speech and mind.

Holy objects only leave positive imprints, no negative imprint. When we watch TV or go sightseeing in the city many of the things we see can leave a negative imprint on our mind, depending on how we look at them. But the benefit that we get from looking at holy objects is like the limitless sky.

Pabongka Dechen Nyingpo mentioned in the Lam Rim teachings that one should treat holy objects as though they were the actual living Buddha, not as material things. Every time you look at your altar think that these holy objects are the actual living Buddha but for the time being the only karma you have is to see Buddha in these forms as statues or pictures. Later, when you achieve the path of merit, you will see them as the actual living Buddha. Your view changes as your mind progresses. That is why it is said that holy objects are manifestations, that Buddha manifests as stupas and so on. Even though there are stories that such and such an artist made them, but without Buddha there is no way this could happen. For example, those whose minds are very pure have the experience of statues speaking to them. Even though the statue was made by an artist, still it speaks. There are many great meditators who experience this and even simple people with not much knowledge of Dharma but strong faith and devotion.

It is very important to understand these benefits, then you can realize how important it is to have holy objects and to make holy objects—not just in your own house but in the country or area where you live and in the world. This is so important for sentient beings.

Therefore holy objects are really wish-fulfilling, unbelievable. Just by existing, these holy objects make it so easy for sentient beings to purify their negative karma—no matter how bad or how much they have accumulated—and so easy to collect extensive merit. They make it so easy for sentient beings to develop the mind in the path to enlightenment, so easy to get out of samsara and so easy to achieve enlightenment. Holy objects are more precious and wish-fulfilling than skies filled with gold, diamonds or even wish-granting jewels because those material things cannot have the same positive effect on your mind that a statue or painting of the Buddha has. Therefore it is very, very important to have many, many holy objects. It makes it very easy to achieve enlightenment and we can collect unbelievable merit just by seeing or looking at them.

Edited by Ven Sarah Thresher from a talk given at the Mitukpa retreat, Milarepa, August 2002