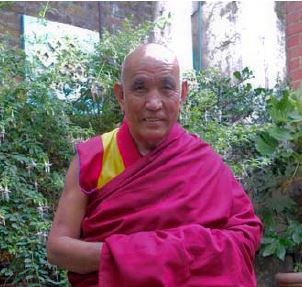 Online registration will close at 2pm on June 9, Monday.

“Certain deities manifest to protect sentient beings from the harm of nagas. The Vajrapani-Hayagriva-Garuda deity, for example, specifically manifests to protect sentient beings from nagas as well as from harmful spirits. Vajrapani, embodiment of the perfect power of all the Buddhas, is the opponent of the spirits that cause such things as epileptic fits.

Of course, we have to remember that the actual origin of harm from nagas and spirits is our own three poisonous minds of ignorance, anger, and attachment. Nagas and spirits are simply conditions for our disease; the real cause of their harm is our own mind.

While Vajrapani-Hayagriva-Garuda practice is a remedy to spirit harm, its ultimate purpose is to liberate us from the three poisonous minds. We should do the practice not just to protect ourselves from this harm, but to liberate ourselves by actualizing the path of method and wisdom within our mind.

Our ultimate aim, of course, is to cease karma and delusion, thus overcoming not only disease but the entire suffering of samsara, including the cycle of death and rebirth. We will then be able to complete the path to enlightenment and work perfectly for all sentient beings.”

You need to have previously received a Great Highest Yoga Tantra Empowerment in order to actually receive this jenang.
If you have not received a highest yoga tantra empowerment and have a strong interest in doing the practice, you can come along and receive the jenang as a blessing. You won’t be able to generate yourself as the deity, but rather, you visualize the deity on the crown of your head. You still have to take and keep the bodhisattva vows.

Rinpoche said, if you are receiving an initiation, you should have some purpose in taking it, having some interest to practice, therefore, it is good to recite the mantra.

Born in Tibet in 1934, Jangtse Chöje Lobsang Tenzin Rinpoche was ordained as a monk at the age of seven. He entered Sera Jey monastery at seventeen and obtained his Geshe Lharampa degree in 1979. Following this, he entered Gyume Tantric University and two years later became Master of Discipline. In 1985 His Holiness the Dalai Lama appointed him abbot of Gyume Tantric Monastery, a position he held for 6 years. Since then he has taught extensively in India and the West. In 2010 he was appointed to the position of Jangtse Choje, which places him second in line for the position of Ganden throne holder (Ganden Tripa), who is the head of the Gelug tradition.

Other Teachings by Jangtse Chöje Rinpoche in the Area:

Lodging available at Land of Medicine Buddha. Please call 831-462-8383 to book your accommodation.