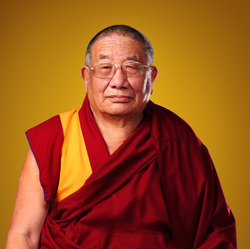 On the eve of the Jangwa at LMB, Geshe Dakpa will give a talk on the famous final verse of the Vajracchedikā Prajñāpāramitā Sūtra, i.e., the Perfection of Wisdom Sutra called the Vajra Cutter (a.k.a. Diamond Cutter). This verse illustrates emptiness and dependent-arising by way of nine similes:

A star, a defective view, a butter lamp flame,
An illusion, a dew drop, a water bubble,
A dream, lightning, a cloud:
See all causative phenomena like this.

Geshe Ngawang Dakpa serves as resident teacher at Tse Chen Ling Center in San Francisco. He was born in Nangchu, northeast of Lhasa, Tibet. He became a monk at the age of ten. At the monastery he studied both Dharma and secular subjects extensively before entering Sera Je Monastery eleven years later. He fled Tibet in 1959. Upon his arrival in India, Geshe-la not only continued his monastic studies, but also spent three years at the Sanskrit University in Benares, earning an MA with honors. Invited by the Queen of Sikkim, he taught at the University of Sikkim for nearly 20 years before returning to Sera monastery in South India and obtaining his Geshe degree.

In the words of our Spiritual Master Lama Zopa Rinpoche: “Geshe-la is an extremely well qualified teacher… (Geshe-la) is an expert in most aspects of Tibetan education – grammar, poetry, all these things. Therefore, he’s an extremely good person to teach the basic program, all the philosophical subjects that are commentaries to the lam-rim (stages of the path to enlightenment). You now have a great opportunity to learn all this.” – Lama Zopa Rinpoche (April 30, 1999)