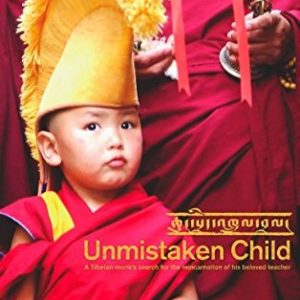 We are showing the movie “Unmistaken Child” particularly for the current Discovering Buddhism class – Death and Rebirth, but this event is open to all.

The reason for showing it at this time is to give a modern-day example of reincarnation. Also, this documentary is almost a home movie for us, as it concerns a lama who lived at our home monastery, Kopan, in Nepal. You will see scenes of monastery life and faces of people who are part of our international Dharma family.

The Buddhist concept of reincarnation, while both mysterious and enchanting, is hard for most westerners to grasp. UNMISTAKEN CHILD follows the four-year search for the reincarnation of Lama Konchog, a world-renowned Tibetan master who passed away in 2001 at age 84. The Dalai Lama charges the deceased monk’s devoted disciple, Tenzin Zopa (who had been in his service since the age of seven), to search for his master’s reincarnation.

Tenzin sets off on this unforgettable quest on foot, mule and even helicopter, through breathtaking landscapes and remote traditional Tibetan villages. Along the way, Tenzin listens to stories about young children with special characteristics, and performs rarely seen ritualistic tests designed to determine the likelihood of reincarnation. He eventually presents the child he believes to be his reincarnated master to the Dalai Lama so that he can make the final decision.

In fact, before the film was released, we knew who the reincarnation, i.e., tulku of Geshe Lama Konchog was. Venerable Tenzin Phuntsok Rinpoche is now about 14 years old and is studying at Sera Monastery, in South India. One of his teachers, Geshe Sanggye has been to teach at Land of Medicine Buddha twice.

See the young tulku teaching in Australia in 2015, on YouTube.