Meditation, Mindfulness and Making Life Meaningful: How to Build a Balanced Path with Love and Attachment 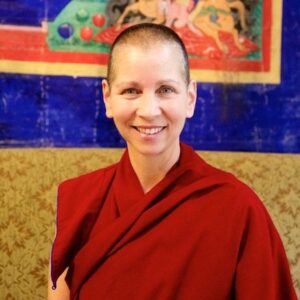 This program is being offered via Zoom and in-person, register for either below.

“Love” and “attachment” are often confused creating conflict in our relationships, particularly intimate ones. If we can lessen our craving and grasping to mindfully balance our life’s activities, experiences of genuine love and freedom organically arise. Explore methods to develop bodhicitta, the enlightened attitude, and the crux of the Tibetan Buddhist path. Discover resources within you that lend to more mindful approaches to everyday living. Meditation guidance and practice will be offered along with insightful techniques for de-stressing and inviting more gratitude and compassion into your life. Open to all levels.

Masks will be required to be worn inside for those attending (not the teacher).

Venerable Amy J. Miller (Ven. Lobsang Chodren) first encountered Tibetan Buddhism in the spring of 1987 during a course at Kopan Monastery in Nepal. Since then, she has spent her time engaged in meditation retreats, study, teaching, and Buddhist center management throughout the world. Before meeting the Dharma, Ven. Amy was a political fundraiser in Washington, DC, and also worked for Mother Jones Magazine in San Francisco, California.

Ven. Amy also trained as an emotional support hospice counselor during the peak of the AIDS epidemic in San Francisco and offers courses and retreats on death and dying and end-of-life care.

From 1992-1995, Ven. Amy managed Tse Chen Ling Center in San Francisco, California. She then served as director of Vajrapani Institute, also in California, from 1995-2004. From 1998–2002, she was also the manager of the Lawudo Retreat Fund (which supports the center in which the sacred cave of Kyabje Zopa Rinpoche is located) in the Mt. Everest region of Nepal. In 2004, after resigning as director, Ven. Amy completed a seven-month solitary retreat at Vajrapani. For most of 2005 and 2006, she organized international teaching tours for and traveled with the esteemed Tibetan Buddhist master, Ven. Kirti Tsenshab Rinpoche until Rinpoche’s death in 2006. Ven. Amy then became a touring teacher for the FPMT (the Foundation for the Preservation of the Mahayana Tradition). From 2008-2014, Ven. Amy was the director of Milarepa Center in Barnet, Vermont.

Ven. Amy had the good fortune to visit Tibet in 1987 and again in 2001 as a pilgrimage leader for the Institute of Noetic Science in the United States. She has also led pilgrimages to India, Nepal, and Bhutan. The next pilgrimage Amy is leading is from April, 30 to May 18, 2023, to Lawudo Retreat Center in the Mount Everest region of Nepal. See Ven. Amy’s website below for more information.

Ven. Amy was ordained as a Buddhist nun in June 2000 and has been teaching extensively since 1992. Her teaching style emphasizes a practical approach to integrating Buddhist philosophy into everyday life. She is happy to help people connect with meditation and mindfulness in an effort to gain a refreshing perspective on normally stressful living. Ven. Amy’s courses and retreats focus on establishing and maintaining a meditation and mindfulness practice, death and dying, overcoming anxiety and depression, battling addiction, dealing with self-esteem issues, and cultivating compassion and loving-kindness.

Ven. Amy is the co-author of Buddhism in a Nutshell and a contributor to Living in the Path, a series of online courses produced by FPMT. Based in the United States, between Pennsylvania and Land of Medicine Buddha in California, Amy teaches and leads retreats and pilgrimages around the world. Her teaching schedule and other information can be found at www.AmyMiller.com.

THE KINDNESS OF DONATIONS

Generosity was one of the first positive attitudes that the Buddha emphasized in his teachings. Generosity creates a healthy flow of Dharma in your life and is the cause of your own prosperity. Your donations help us offer Buddhist teachings and meditation retreats to the world, a path that can lead people out of suffering to ultimate happiness.

Registration and Donations for Meditation, Mindfulness and Making Life Meaningful: How to Build a Balanced Path with Love and Attachment