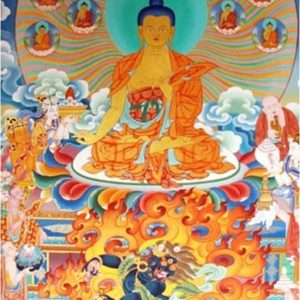 Please register for this free event so that we have an attendance estimate. Thank you!

On the eleventh day, the great patron Anathapindika made offerings to The Buddha, who was seated upon the lion throne in meditation. Though the assembly could not see his form, his body radiated golden light, while in a great voice he expounded the teaching.

On the twelfth day, the householder Tseta invited The Buddha to speak. The Tathagata entered into the meditation of great love and golden light radiated from his body, extending throughout all worlds. The rays of light cleared the three poisons from the minds of everyone and their compassion increased. They loved each other as a father and mother love their children – as a brother loves his sister.
On the thirteenth day, King Shun Tsin made offerings to The Buddha. The Tathagata sat on the lion throne and two rays of light, rising fifteen meters, radiated from his navel. On the point of each ray of light was a lotus, and on each lotus, a Buddha. From the navel of each Buddha extended two rays of light and upon each of which was a lotus with a Buddha, and so on, filling all worlds. All the Buddhas were expounding the teachings.
On the fourteenth day King Udrayana made offerings to The Buddha. He strewed flowers in front of The Buddha, and they changed into twelve hundred and fifty carriages made of precious jewels. The Buddha taught the Dharma to beings throughout all worlds as a doctor healed the sick.
On the fifteenth and final day of the spring celebration, King Bimbisara brought gifts to The Buddha. The Buddha then told King Bimbisara to bring vessels for food and the vessels were miraculously filled with foods of a hundred different tastes. When the assembly ate them, their bodies and minds were completely satisfied. The Buddha asked them, “Why is there such immeasurable misery in the world?” By his blessing, even the eighteen kinds of demons realized that their misery was caused by deeds they had done themselves. They felt great faith in The Buddha. As on all the previous days, those assembled attained great advancement. Some increased their bodhi-mind, some attained arhatship, some attained the stage of non-returning, many attained the seeds of rebirth as humans or gods, and countless others increased their virtue.
Lightly edited from kurukulla.org
♦ See Refund Policy (opens in new window). ♦ If you pay with PayPal, you will still be able to pay with a credit card. You don't need to have a PayPal account. ♦ If you select a $0 option below just complete the form as usual and submit it ♦