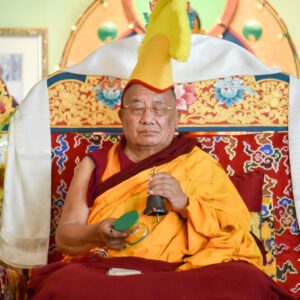 TO REGISTER FOR THIS EVENT, HOSTED BY TSE CHEN LING, PLEASE CLICK HERE AND REGISTER AT THE BOTTOM OF THE PAGE

On Sunday, March 27, 2022, Tse Chen Ling will offer an online Long Life Lama Chopa and Tsok to our longtime teacher, Geshe Ngawang Dakpa. Also in the month of March, Geshe-la will celebrate his 90th birthday. Tse Chen Ling is honored that Geshe-la has accepted their offering of this puja.

In 1999, Geshe-la became the resident teacher of Tse Chen Ling. Though officially retired several years ago, Geshe-la has kindly and tirelessly continued to teach the students of Tse Chen Ling and his devoted group of Mandarin-speaking students in the South Bay. Geshe Dakpa has given teachings and led rituals at other Bay Area FPMT and Dharma centers, including here at Land of Medicine Buddha. It is exceedingly precious to have Geshe-la with us and teaching, as he has done since arriving in the Bay Area more than 22 years ago.

This puja will take place on Zoom. Please plan on joining 15 minutes early so they can start promptly when Geshe-la joins. We anticipate that students will be attending from multiple time zones, and we rejoice that we can all be together to honor our precious teacher.

Ven. Stephen Carlier will be the umze (chant leader) for the puja. The text will be emailed in advance to all who RSVP. Please print or view the text on your own screens to follow along. The text will not be shared on screen during the puja, so that students may be able to see Geshe-la throughout the ceremony.

Tse Chen Ling welcomes any donations you would like to make. All donations will go to cover the modest expenses of offering this puja (including offerings to the umze and Geshe-la’s attendant) with the remainder being offered directly to Geshe Dakpa.

To receive the Zoom link for the event, please register HERE, or email . If you wish you make an offering for the puja, please select the online donation of your choice, or email to arrange an offline donation.

Geshe Ngawang Dakpa served as a resident teacher at Tse Chen Ling from 1999-2016. He was born in Nakchu, northeast of Lhasa, Tibet, and became a monk at the age of ten. At the local monastery of Othok, he studied both Dharma and secular subjects extensively before entering Sera Jey Monastery eleven years later. He fled Tibet in 1959. Upon his arrival in India, Geshe-la not only continued his monastic studies, but also spent three years at the Sanskrit University in Varansi, earning an Acharya Degree with honors. Invited by the Queen of Sikkim, he taught at the University of Sikkim for nearly 20 years before returning to Sera Jey monastery in South India and obtaining his Geshe degree. Additionally, Geshe-la taught in Taiwan before arriving in the San Francisco Bay Area in 1999 where he continues to teach to the present day.

TO REGISTER FOR THIS EVENT, HOSTED BY TSE CHEN LING, PLEASE CLICK HERE AND REGISTER AT THE BOTTOM OF THE PAGE