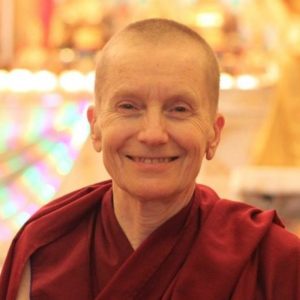 Is there a method to follow to become enlightened?

This retreat will guide you step-by-step in a method which has been used for hundreds of years by the realized masters of Tibet.

The genre of teachings known as the Stages of the Path (Tibetan: Lamrim) represents a synthesis of the entire path to enlightenment. Based on Atisha’s Lamp for the Path to Enlightenment, they present the essence of all the Buddha’s teachings in a clear and concise way, easy to understand and apply in meditation.

Lama Tsongkhapa composed several stages of the path commentaries, from extensive to very concise. This retreat will be based on the outline of the Middle Length Lamrim by Lama Tsongkhapa. Note: this retreat is not part of an FPMT Lamrim Basic Program module.

Don’t miss this chance to get teachings from one of our most senior western teachers, Venerable Sangye Khadro. She is an accomplished author and experienced retreat leader known as a very kind and instructive teacher.

Originally from California, Venerable Sangye Khadro (Kathleen McDonald) began studying Buddhism with Tibetan lamas in Dharamsala, India, in 1973. She became a nun in Nepal the following year, and received full (bhikshuni) ordination in 1988.

At the request of her teachers, she began teaching in 1980, and since then has been teaching Buddhism and meditation in various countries around the world, occasionally taking time off for personal retreats. She served as resident teacher in Buddha House, Australia, for two years and in Amitabha Buddhist Centre in Singapore for eleven years.

From 2008–2015 she followed the Masters Program at Lama Tsong Khapa Institute in Italy. Her book, “How to Meditate”, is a best selling book of Wisdom Publications.

Notice: There is road work on Prescott Rd. If you are commuting, you will need to be up here before 9am or you won’t be able to get through in the morning. Hard closures end at 2:30 each day, but there may still be delays after that. See news story.

Registration and Donations for Lamrim Retreat with Ven. Sangye Khadro