We will send a Zoom link to all registrants ahead of the teachings.

Please reach out to Rolland Swing, Spiritual Program Coordinator, at for any Zoom link or sign-up issues. 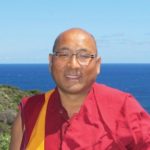