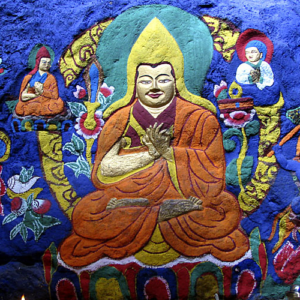 In Tibetan culture, it is a festival of lights – butter lamps in the olden days and now colored electric lights, just like the Christmas lights that we see all around us here.

Lama Tsongkhapa Guru Yoga (Ganden Lhagyama) and Tsog will be recited in Tibetan and English.

Lama Tsongkhapa (1357-1419 C.E.) was a great scholar-monk-yogi who studied with great master of his time from all the existing schools of Buddhism of Tibet. He re-examined the texts checking things against classical Indian sources to see what was authentic and what needed to be thrown out because of errors. Through his direct communication with Manjushri, Tsongkhapa was able to clarify the intended meaning of the scriptures and commentaries on the profound topic of emptiness.