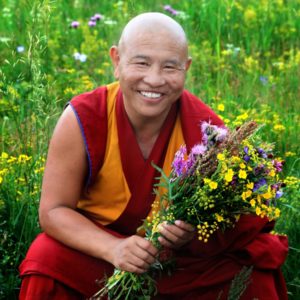 The Four Noble Truths taught at the first discourse by the Buddha will be familiar to anybody who has read an introduction to Buddhism. Each of these Truths has four points – these are things that a person realizes when they attain the Path of Seeing, i.e., when they see ultimate reality directly. But we can meditate on them even before that in order to contradict some wrong ideas that we have about things.

This public talk is open to everyone.

Jhado Rinpoche will also be giving the full empowerment into Namgyalma – the deity for long life and purification – from Nov 3 – 6, with teachings and instructions for performing the retreat. A Namgyalma retreat will follow, from Nov 6 – 22. Please click on above links for more information.

Jhado Rinpoche (Tenzin Jungne) was born in 1954 to a nomadic family living in the area of Namtso Lake, 220 kilometers north of Lhasa, Tibet. At the age of three he was recognized and enthroned as the 6th incarnation of the abbot of Jhado Monastery. After fleeing Tibet in 1959, Rinpoche lived briefly in Nepal and later spent several years in Dalhausie and Dharamsala in North India where he completed his basic studies in Tibetan reading, writing and reciting Buddhist texts. Rinpoche took his vows as a novice monk from His Holiness the Dalai Lama in 1964 and his full ordination vows from the late Ling Rinpoche in 1973.

From 1972 until 1990, Rinpoche studied at Sera Je Monastery in South India, where he received extensive teachings from many great lamas such as Khensur Rinpoche and the great master Lobsang Wangchuk – and afterwards at the Gyuto Tantric Monastic University. In 1991, he attained the degree of Geshe Lha Rampa, the highest level of education in the Geluk tradition. He then went on to continue his studies at Gyuto Tantric College in lower Dharamsala.

Jhado Tulku Rinpoche is one of the most highly esteemed lamas in the Geluk lineage today. In addition to his excellent education in the Geluk monastic college system, over the years Rinpoche has also received many oral transmissions and empowerments from His Holiness the Dalai Lama and his two main tutors, as well as from many great teachers from other traditions, including the famous Nyingma master Trulshik Rinpoche and Chogye Trichen Rinpoche.

Registration and Donations for Four Noble Truths and Sixteen Aspects