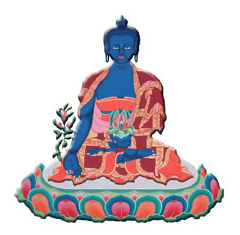 Saka Dawa is one of the four great holy days of the Tibetan calendar, commemorating Shakyamuni Buddha’s birth, enlightenment, and passing into parinirvana. Any actions done on Saka Dawa are multiplied in their power. Karmic results are multiplied by one hundred million, as cited by Lama Zopa Rinpoche in the Vinaya text Treasure of Quotations and Logic. It is a very powerful time to practice and increase one’s commitment to both practice and study.

On the special day, we will be performing the extensive Medicine Budda puja, written by the fifth Dalai Lama. Join us on June 9 at 5pm.  Please feel free to attend the whole practice or drop-in at any time.

Bhagavan with equal compassion for all,
Whose name, when merely heard, dispels the suffering of lower realms,
Dispeller of disease and the three poisons:
I prostrate to Medicine Buddha Lapis Light.

Medicine Buddha is the manifestation of the healing energy of all enlightened beings. Prayers to Medicine Buddha are especially powerful because of the extensive prayers they took to benefit sentient beings. They strongly prayed for the temporal and ultimate happiness of all sentient beings; they vowed that their prayers would be actualized during these times. It is said in the scriptures that in the degenerate times of this eon, such as now, the blessings of the Medicine Buddha becomes more powerful.

Reciting Medicine Buddha’s name and mantra one time becomes having recited the names and mantras of all the Tathagatas of the past, present and future.

We are also doing this Extensive Medicine Buddha Puja as part of the instructions for pacifying earthquakes. It takes about 3.5 hours with breaks.