**Presented via Zoom. Registration required. Please keep an eye out for an automated email with your Zoom Meeting Link soon after you register. Please also check in your Spam/Promotions Folders** 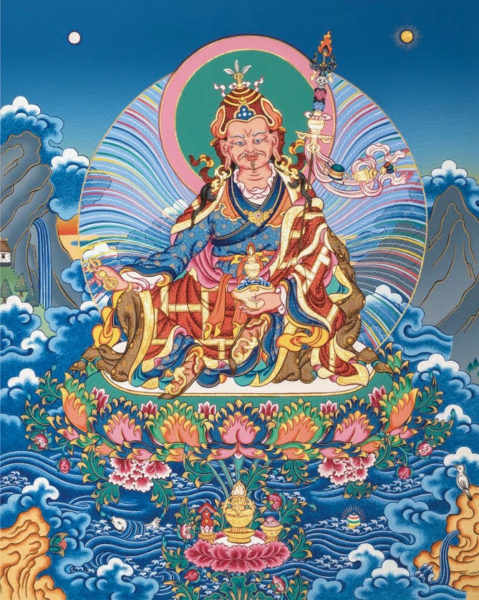 2) The Prayer in Six Vajra Lines, also called Prayer to Guru Rinpoche to Clear Away Obstacles on the Path (དུས་གསུམ་སངས་རྒྱས་གུ་རུ་རིན་པོ་ཆེ༔) – Popularly known as Dü Sum Sangye (Dus gsum sangs rgyas), this short prayer to Guru Padmasambhava was discovered as a treasure (gter ma) by Chokgyur Dechen Lingpa. As indicated in the colophon, it was—and still is—regarded as especially pertinent for the current time.

3) The Prayer that Swiftly Fulfills All Wishes (Sampa Nyur Drupma) (།གུ་རུའི་གསོལ་འདེབས་བསམ་པ་མྱུར་འགྲུབ་བཞུགས།) – This prayer to Guru Padmasambhava for the swift fulfillment of all wishes begins with a verse from ‘The Infinite Cloud Banks of Profound Meaning’ (zab don rgya mtsho’i sprin phung), which is part of Longchen Rabjam’s Khandro Yangtik (mkha’ ‘gro yang tig), and concludes with several verses written by Jigme Lingpa. It is said to be particularly beneficial for Tibet, as it has the power to pacify illness, prevent famine and border invasions, and contribute to the welfare of the teachings and beings.

In addition to explanations, Geshe Dakpa will be giving the oral transmission of these three prayers during the session.

Ven. Stephen Carlier will provide English interpretation of Geshe Dakpa’s teaching, and the class will be hosted by Stephen Butler. This class is a collaboration between Land of Medicine Buddha and our sister center, Tse Chen Ling.

Please note, the descriptions of the prayers were formulated by Lotsawa House.

Geshe Ngawang Dakpa served as a resident teacher at Tse Chen Ling. He was born in Nakchu, northeast of Lhasa, Tibet and became a monk at the age of ten. At the local monastery of Othok he studied both Dharma and secular subjects extensively before entering Sera Je Monastery eleven years later. He fled Tibet in 1959. Upon his arrival in India, Geshe-la not only continued his monastic studies, but also spent three years at the Sanskrit University in Varanasi, earning an MA with honors. Invited by the Queen of Sikkim, he taught at the University of Sikkim for nearly 20 years before returning to Sera monastery in South India and obtaining his Geshe degree. Additionally, Geshe-la taught in Taiwan before arriving in the San Francisco Bay Area in 1999.

ABOUT THE TRANSLATOR – VEN. STEVEN CARLIER

Venerable Steve Carlier resides at Land of Medicine Buddha, teaching the Basic Program. He has been studying Buddhism since 1977 and was ordained as a Buddhist monk by Lama Zopa in 1979, then receiving full ordination from Serkong Tsenshab Rinpoche the following year. He studied for eleven years at Nalanda Monastery in France, and from 1993 to 2004 was one of only a handful of Westerners who have followed the Nalanda (India) tradition of studies at Sera Monastery in India. He has interpreted for several of the great masters of Tibetan Buddhism.

WE ARE ABLE TO KEEP OUR GOMPA DOORS OPEN DUE TO THE KINDNESS AND GENEROSITY OF FOLKS LIKE YOU. DONATIONS RECEIVED FOR REGISTRATION OF THIS CLASS GO TOWARDS THE UP-KEEP, FUNCTIONING AND RUNNING OF LAND OF MEDICINE BUDDHA.

Registration and Donations for Explanation & Oral Transmission of Prayers to Padmasambhava, with Geshe Ngawang Dakpa