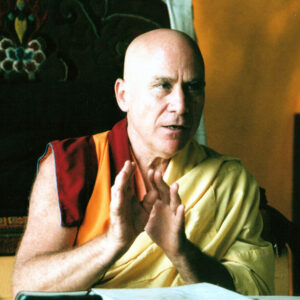 It begins with the study of how mind functions: the distinction between sensory and mental consciousness, and the various levels of subtlety of mental consciousness – levels of mind not posited in neuroscience or modern psychology – that need to be accessed in order to achieve enlightenment.

Born in Chicago in 1945. Graduated MIT in ’67 with a BSc in Physics. After a  couple years of graduate school in Physics, taught at Choate School in Connecticut and American Community School in Beruit. Attended the 7th Kopan course in 1974 and took initial ordination with Lama Yeshe and Lama Zopa Rinpoche in 12/1975; Getsul in 1976 with Kyabje Trijang Rinpoche and Gelong in 1977 with Kyabje Ling Rinpoche.

Taught a one month Kopan course, Spring 1977. Studied and meditated at Kopan and in Dharamsala for four years. Was SPC at Manjushri Institute, U.K. and studied and taught there for more than three years. After six months of teachings in India at the first Dharma celebration, became SPC at Istituto Lama Tzong Khapa in Italy. Studied and taught there for around seven years. Helped start the Seven Year Study Program, teaching and translating the written material for Abhisamayalamkara, Madhyamakavatara  and part of Abhidharmakosha. Was SPC and principal teacher at Tushita Delhi for two years while earning an MA in Buddhist Studies from Delhi University. Studied at the Institute of Dialectics in Dharamsala and the Institute of Higher Tibetan Studies in Sarnath.

Was the English tutor of Lama Osel Rinpoche at Sera Monastery in India for more than three years. Was principal teacher at Hiyagriva Centre in Perth, Australia and at Dorje Chang Institute in New Zealand for around two years while teaching some courses of the Basic Program. Helped found the FPMT Center in Mongolia and taught there for around six months.

He was the teacher at the founding of Thubten Norbu Ling, 8/2000-2/2001. Taught the Basic Program at Land of Medicine Buddha in 2003 and 2004; and the 2005 Kopan Course. For six years, George lived at Deer Park with Kyabje Geshe Sopa in Madison, WI, teaching and editing Geshe-la’s teachings on Lama Tzong Khapa’s commentary to Madhyamakavatara.

After leaving Deer Park in late 2012, George found a cabin North of Asheville, NC, and has been doing retreat there and occasionally teaching at Amitabha Buddhist Center, Singapore, Maitripa Institute in Portland, OR, Guhyasamaja Center in Washington, DC, Kadampa Center in Raleigh, NC and other centers. He finished a three year retreat on 5/31/018. Recently, during the Covid pandemic, George has been giving occasional teachings via Zoom.

Ven. George Churinoff received extensive teachings in both the Sutra and Tantra traditions from the most qualified Tibetan masters and have done many retreats and has taught around the world in America, Europe, Asia, Australia and New Zealand.

Registration and Donations for Basic Program: Mind and Cognition with Ven. George Churinoff