The first full moon in the Tibetan lunar calendar is celebrated as the Day of Miracles, or Chötrul Duchen, which commemorates the final day of miraculous display by the Buddha which lasted 15 days. The Buddha performed the miracles in response to a challenge from six rival teachers. These 15 days are merit-multiplying days in which any virtue created is magnified millions of times. Chötrul Duchen, which falls on 19 February 2019, is also the most special day of the Mönlam Chenmo, the Great Prayer Festival, where thousands of people, lay and ordained alike, pray, and make offerings of food, tea, lights or money to the Sangha.

The Western year 2019 corresponds with the Tibetan year 2146, Female Earth Pig. At Land of Medicine Buddha, this year, on Losar (Tibetan new year) we will have a traditional Tibetan-style morning of pujas on Tuesday, February 5, (9am), and then an Extensive Medicine Buddha on Sunday, February 17, (2pm), close to the end of the Days of Miracles, still within the multiplying days.

THE MIRACULOUS DEEDS OF BUDDHA SHAKYAMUNI AT SHRAVASTI 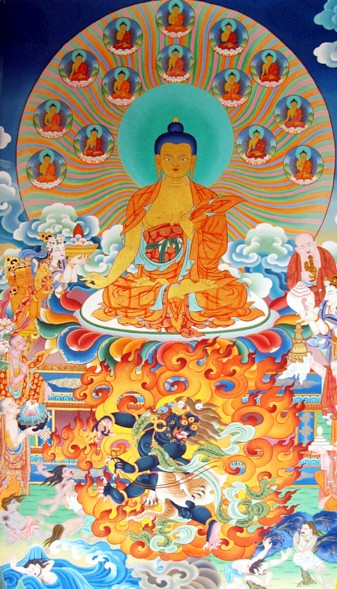 At one time, Buddha was staying with hundreds of fully ordained monks in the Bamboo Grove outside of Rajagriha. The ruler of that country, King Bimbisara, was one of Buddha’s greatest patrons. In loyalty and respect for Buddha and his monks, the King led many of his subjects to the practice of the teaching. Six heretical teachers were also staying there at that time, and their deceptive teachings were the cause of many unskillful actions. King Bimbisara’s younger brother followed these teachers and made great offerings to them, thinking that they taught the path to liberation. As a result he became defiled by error, so that even though Buddha was showing the glories of enlightenment, he did not see it. King Bimbisara persuaded his brother to give up his erroneous ideas but his brother replied, “I have my own teacher. Why should I listen to Buddha?”

Nevertheless, feeling that he should respect King Bimbisara’s feelings, the brother decided to give a feast, offering food and gifts to all who came. The six teachers came and sat in the highest seats. When Buddha and his disciples arrived, they walked toward the few remaining seats, but before they could reach them, the six teachers found themselves getting up from the highest seats and taking the lower. They tried three times to take the higher seats, but each time found themselves in the lower. Finally, feeling ashamed, they remained there.