Our Buddhist Lineage and Teachers 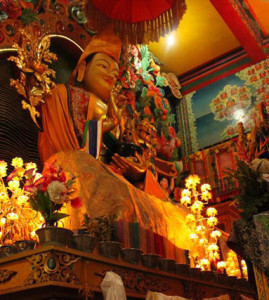 Lama Tsongkhapa (1357-1419 C.E.) was a great scholar-monk-yogi who studied with great master of his time from all the existing schools of Buddhism of Tibet. He re-examined the texts checking things against classical Indian sources to see what was authentic and what needed to be thrown out because of errors. Through his direct communication with Manjushri, Tsongkhapa was able to clarify the intended meaning of the scriptures and commentaries on the profound topic of emptiness.

F.P.M.T. – Foundation for the Preservation of the Mahayana Tradition

Land of Medicine Buddha is also part of this modern-day organization, the FPMT, which was established in the 1970’s in order to hold together the many Dharma centers and projects that have sprung out of the teachings of Lama Thubten Yeshe and Lama Zopa Rinpoche, beginning with Kopan Monastery in Kathmandu, Nepal. Some of these centers and projects were directly founded by the lamas, but most of them come about because Dharma students – followers of Lama Yeshe and Lama Zopa Rinpoche – wanted to have a center where they live or wanted to start a social service project. The international office is located in Portland, Oregon, USA. Click here for a directory of all the centers.

His Holiness the Dalai Lama – Our Spiritual Guide 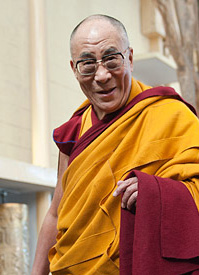 His Holiness the Dalai Lama is the greatest source of inspiration for the Foundation and therefore service to His Holiness must be one of our primary activities. Kyabje Zopa Rinpoche said:

“‘His Holiness’ Office is very happy with the organization. He has compassion you see, gives advice on things we request. Doesn’t have time but out of compassion He does the Dharma activities, creates the centers, gives teachings, like that, actually there is not time, but kindly He accepts.

“Always giving. Giving advice, looking after, much concerned. So I think we must also offer much service from time to time to His Holiness. I think this makes a connection life to life for all the students, members, directors. Those who make connection with His Holiness in this life, make connection in other, future lives, to meet His Holiness again, to be able to offer service, to be closer and closer. Through actions such as these one reaches enlightenment. It can then be achieved. It comes.”

“It’s a great thing to be able to offer service to His Holiness. To fulfill His wishes. As the organization gets developed more and more I think we will be able to offer more and more service. In this way all the centers are being beneficial for sentient beings. This is a way of creating the cause. By pleasing the guru.” 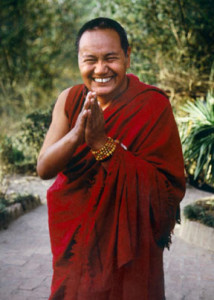 Lama Yeshe (1935-1984) was a dynamic teacher who influenced a generation of seekers with his broken but groovy way of speaking English, having learned the language from the hippies who were flocking to India and Nepal during the 1960’s and ’70’s. Although he was Lama Zopa Rinpoche’s teacher, the two lamas were really a team, teaching and traveling together until Lama Yeshe’s all-to-early passing in 1984. Lama Yeshe had a close connection with Santa Cruz, California, teaching several courses at Vajrapani Institute, Boulder Creek, and even one semester at UCSC.

Lama Yeshe personally selected the old resort which eventually became Land of Medicine Buddha – Greenwood Lodge – as the location for a new FPMT center which would be able to reach more people and would offer accessible and perhaps eclectic programs. When Lama Yeshe knew he was dying, he came back to California and was cared from by local-area Dharma students at a house they rented for him in Aptos. When he eventually passed away, his cremation – attended by many high lamas – was held at Vajrapani Institute. Lama Yeshe Wisdom Archive is a good place to find Lama Yeshe’s teachings. 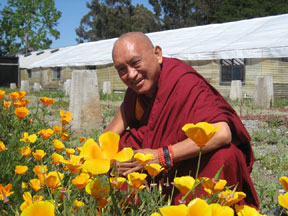 Lama Zopa Rinpoche is the spiritual head of our organization and is still very much involved with guiding our center. The title Kyabje, refuge lord, was given to him by another high lama around the year 2001. He is commonly known as Rinpoche – precious one – by the Dharma students in our organization; his personal name, Zopa, means patience. He began patiently teaching Western students in the late 1960’s and hasn’t stopped yet.

Rinpoche is responsible for the spiritual well-being of thousand of people around the world, people of all nationalities, so he tends to travel quite a bit. In the late 1990’s, some Dharma students nearby decided to coax Rinpoche into spending more time here, so they bought an old house in Aptos, California and fixed it up for him to stay in. Now, Rinpoche comes home to our neighborhood between trips and we get to see him on informal occasions and for surprise teachings, as well as the occasional scheduled event. Keep your eyes open and you might catch a sighting of him at the local plant nursery or at the beach. The Facebook Fan Page for Lama Zopa Rinpoche often has nice pictures and stories.