Buddha Statue for Alcove of Stupa 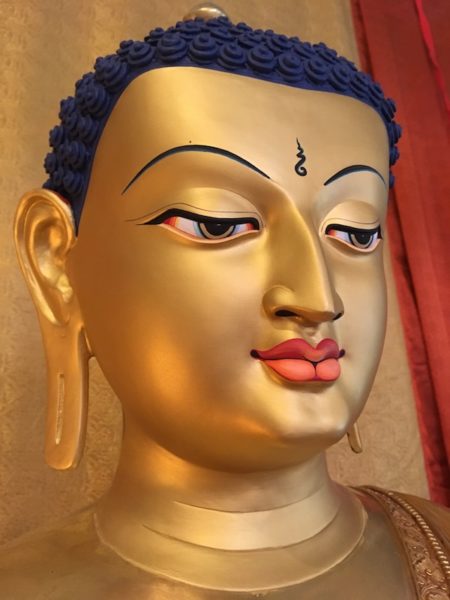 The Buddha statue that will go in the alcove of our stupa arrived mid-May, 2018. Project Manager, Denice Macy tells the story.

Tell us about the design process:

“In March 2017, Lama Zopa Rinpoche took me into his rooms at Kopan [Monastery] and showed me a lot of his statues and pointed out the facial features of statues that best represented the Buddha. He said, ‘See this face? This is how a good artist shows the Buddha’s face. The Buddha’s face is brilliant and beautiful, naturally, and good artists can show that.’ Rinpoche wanted it to be life-size; he was emphatic about that.

“Rinpoche was completely working with the makers to design our statue to be similar to the one in Bodhgaya, at the Mahabodhi stupa. I visited the statue maker in Kathmandu right at the Boudhanath stupa. Rinpoche uses that statue maker. I was shown a picture of the statue which was at one of their studios outside of town.” 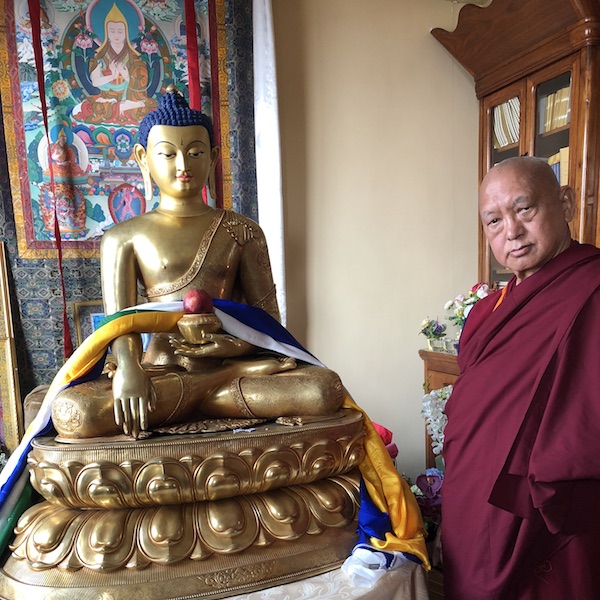 And this is a gift from Lama Zopa Rinpoche?

“Originally Lama Zopa Rinpoche made a $50,000 donation to the building of the stupa. A few years later, while giving a talk before a Vajrayogini practice, he mentioned wanting to make another sizable offering. This statue is that offering. He wanted to use the very best statue maker in Nepal and worked closely with them to make the image of the rupakaya for our stupa. It took almost two years from its beginning to its arrival.”

How do you feel about the way it turned out, Denice? 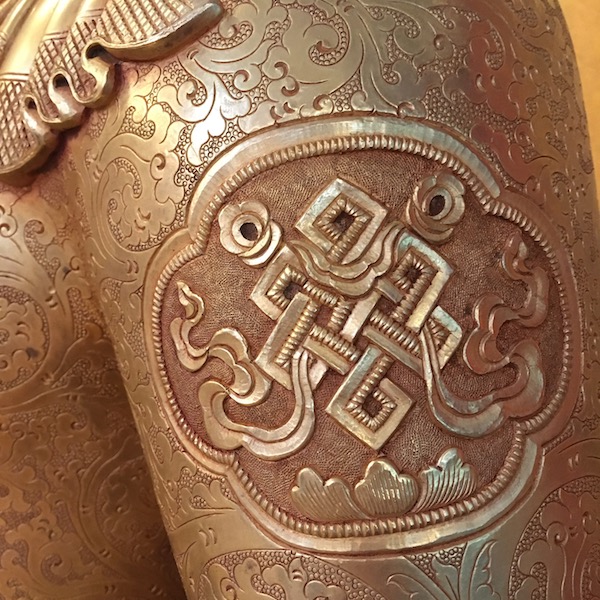 “The engraving and detail on the statue is phenomenal. There are auspicious symbols on the arms and knees and finely detailed designs on the robes. When I wrote Ven. Roger after it came, I said, ‘Our minds are blown.’ That’s the closest I could come in my limited vocabulary to expressing my feeling. We are profoundly honored by how since the very beginning Rinpoche has been right there, engaged in every way, in bringing an inspiring holy object to our land. When people walk up the hill, they will first see the stupa, and then they will look into the alcove and see the statue in there and will be blown away.”

What is happening this summer?

“We plan to have a table at the festival with information on the next phase: the garden. People will be able to sponsor plants. There will be smaller stupas in the garden – three sizes, so everyone will be able to sponsor or have a stupa dedicated to them. The molded relief sculptures will be finished on the top two levels of the stupa by the end of this summer. Now we are preparing the ground for the pathways and gardens. We need to install drip irrigation system. Once that is done we can put the paths in. The garden will be Japanese inspired, according to Lama Zopa Rinpoche’s wishes.”

And more from another member of the stupa team:

Bob Cayton, who has been involved in the Stupa Project since the beginning, was onsite on June 13, to take care of some business related to the landscaping around the stupa. He gave these comments about the progress:

“I am excited. The reality is right there [gesturing towards the nearly 40-ft tall stupa]. Lama Zopa Rinpoche proposed this stupa project in 1999, although the first plan was in a different form. Now it’s almost twenty years later. Every time I come up here I rejoice. It’s perfect.” ♦