We are delighted to announce that Geshe Ngawang Sangye (Geshe Sangye, for short), from Sera Je Monastery, will be visiting Land of Medicine Buddha again in October-November (2016), and teaching courses on key Buddhist topics such as the the bodhisattva’s path, Lama Tsongkhapa’s teachings on emptiness, and more, starting Thursday, October 13. 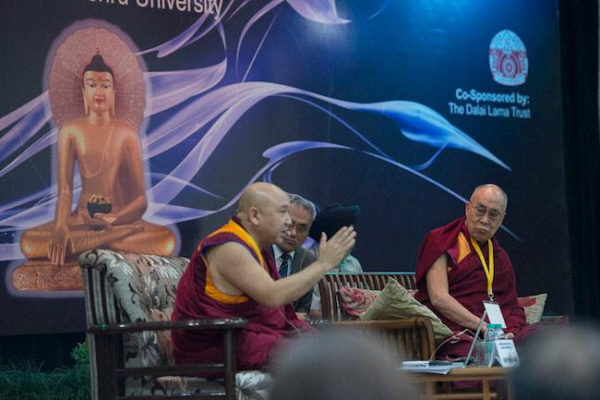 Geshe is a title indicating an advanced degree, something like a PhD, literally ‘virtuous friend’ (kalyana-mitra). San-gye is the Tibetan term for buddha, literally ‘purified-developed’. Sera Je is the major Tibetan Buddhist monastery that our organization is connected with. It used to be in Lhasa for hundreds of years, but was re-established in the South Indian state of Karnataka about 50 years ago, near Mysore.

Geshe Sangye is a Lharampa Geshe and is currently one of the leading residental teachers at Sera. He is also the teacher of Ven. Steve Carlier and Ven. Samten and more recently, Tenzin Puntsog Rinpoche, the reincarnation of Geshe Lama Konchog has also started taking classes from him.

Geshe Sangye taught at Land of Medicine Buddha several years ago and we have been trying for a while to get him back. This visit comes as a last-minute surprise. Please join in any of these classes. Some of the topics are rather advanced, but the Sunday morning sessions will be general talks accessible to students of all levels.

While he was Disciplinarian at Sera Je, His Holiness during a public teaching pointed the Head of the Gelugpa and him as two Ladakhi monks who had studied well. That’s pretty amazing. Personally I find him exciting to listen to. His way of teaching is always very animated. He sparkles. He’s scintillating. He’s very good. He’s very learned in all Sutra topics, and especially in Legshe Nyingpo, which was what I first received instruction from him, and I was enthralled from beginning to end. He’s the main teacher of the Kopan monks at Sera now. His Holiness is very fond of him.”

See Calendar for all dates